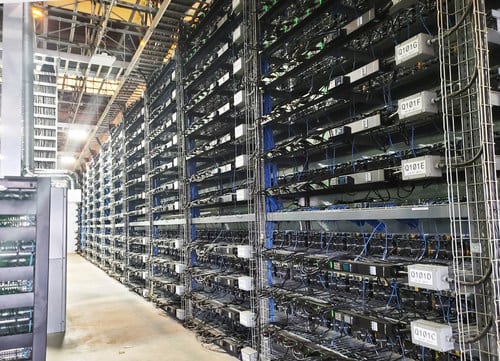 AUSTIN, Texas and CHICAGO, July 21, 2021 /PRNewswire/ — Core Scientific Holding Co. (“Core Scientific” or the “Company”), a leader in customizable infrastructure and software solutions to large scale customers for blockchain hosting and digital asset mining, and Power & Digital Infrastructure Acquisition Corp. (Nasdaq: XPDI), a publicly traded special purpose acquisition company, today announced they have entered into a definitive merger agreement pursuant to which XPDI will acquire the Company (the “Transaction”).  As a result of the Transaction, which values the Company at a pro forma enterprise value of approximately $4.3 billion, the combined company is expected to operate as Core Scientific, Inc. and remain a publicly listed company on the NASDAQ stock market.

XPDI believes that Core Scientific presents an opportunity to invest in a leader in multiple XPDI target industry sectors of blockchain and frontier technology infrastructure. XPDI’s management team and independent directors comprise experienced investors, advisors, developers, and operators in energy and ESG. XPDI is a special purpose acquisition company with a blockchain infrastructure focus supported by BlackRock, the world’s largest asset manager and the anchor investor in XPDI.  XPDI closed its upsized, oversubscribed initial public offering in February 2021 and has approximately $345 million cash in trust.

Management and Governance
Following the close of the Transaction, the combined company will continue to be led by Mike Levitt as Co-Chairman and Chief Executive Officer of Core Scientific.  Mr. Levitt is supported by a highly successful and agile leadership team with significant expertise across the technology, blockchain, and financial services industries.  Darin Feinstein, Chief Executive Officer and Founder of Blockcap and Co-Founder of Core Scientific, will serve as Co-Chairman of the Company. Mr. Levitt, Mr. Feinstein, and the management team of Core Scientific have a proven track record of building and scaling businesses and delivering long-term shareholder value.

“We are excited to enter into the Transaction at a significant inflection point in Core Scientific’s growth trajectory and in the advancement of blockchain technology,” said Mr. Levitt.  “We have built the largest blockchain hosting provider and digital asset miner in North America. Our diversified business is positioned to continue supporting the growth and adoption of digital assets globally. We are successfully leveraging our first mover advantage, scale, proprietary designs and software, network of strategic relationships, and culture of innovation to create value for our customers and stakeholders.  With our pending acquisition of Blockcap, we look forward to growing our self-mining digital asset business while continuing to deliver best-in-class reliability and performance to leading blockchain innovators.”

Said Darin Feinstein, “Core Scientific’s blockchain infrastructure business is unparalleled, backed by more than 70 blockchain and infrastructure-related patents and applications, and led by an amazing team, which now will be creating value for our collective stakeholders.  We are proud to unite our companies and move forward into the capital markets.”

Patrick Eilers, Chief Executive Officer of XPDI, said, “Core Scientific is at the epicenter of disruptive technologies, which collectively comprise a large and growing market opportunity for Bitcoin and other digital assets. XPDI views the Company as solving a pressing need for a credible, reliable and focused enterprise solutions provider capable of powering these new, long-term growth markets and adjacencies presented by broader blockchain applications and technologies.  Moreover, the Company’s commitment to ESG as a 100% net carbon-neutral business aligns with XPDI’s aim to take today’s high growth sectors and power them with more sustainable sources of energy.”

Ted Brombach, Chairman of XPDI, further stated “We are very pleased to support Core Scientific’s transition to the public markets and believe that the Company’s vertical integration will provide a competitive advantage in the industry.”

Transaction Overview
The Transaction values the combined company at an implied fully diluted pro forma enterprise value of approximately $4.3 billion, representing a 8.8x multiple of Core Scientific’s 2021 projected revenue of $493 million and a 21.4 x multiple of 2021 projected adjusted EBITDA of $203 million.  The Company was adjusted EBITDA positive for the year ended December 31, 2020.

Additional information about the proposed merger, including a copy of the merger agreement and investor presentation, will be provided in a Current Report on Form 8-K to be filed by XPDI today with the Securities and Exchange Commission (the “SEC”) and available at www.sec.gov. The investor presentation can also be found on the Investors section of Core Scientific’s website at www.corescientific.com.  XPDI intends to file a registration statement, which will contain a proxy statement/prospectus, with the SEC in connection with the Transaction.

Forward Looking Statements
This press release includes “forward-looking statements” within the meaning of the “safe harbor” provisions of the United States Private Securities Litigation Reform Act of 1995. Forward-looking statements may be identified by the use of words such as “estimate,” “plan,” “project,” “forecast,” “intend,” “will,” “expect,” “anticipate,” “believe,” “seek,” “target” or other similar expressions that predict or indicate future events or trends or that are not statements of historical matters. These forward-looking statements include, but are not limited to, statements regarding projections, estimates and forecasts of revenue and other financial and performance metrics, projections of market opportunity and expectations, the estimated implied enterprise value of the combined company, Core Scientific’s ability to scale and grow its business, source clean and renewable energy, the advantages and expected growth of the combined company, the combined company’s ability to source and retain talent, the cash position of the combined company following closing, XPDI’s and Core Scientific’s ability to consummate the Transaction, and expectations related to the terms and timing of the Transaction. These statements are based on various assumptions, whether or not identified in this press release, and on the current expectations of XPDI’s and Core Scientific’s management and are not predictions of actual performance.

INVESTMENT IN ANY SECURITIES DESCRIBED HEREIN HAS NOT BEEN APPROVED OR DISAPPROVED BY THE SEC OR ANY OTHER REGULATORY AUTHORITY NOR HAS ANY AUTHORITY PASSED UPON OR ENDORSED THE MERITS OF THE OFFERING OR THE ACCURACY OR ADEQUACY OF THE INFORMATION CONTAINED HEREIN. ANY REPRESENTATION TO THE CONTRARY IS A CRIMINAL OFFENSE.

Participants in the Solicitation
XPDI, Core Scientific and certain of their respective directors, executive officers and other members of management and employees may, under SEC rules, be deemed to be participants in the solicitations of proxies from XPDI’s stockholders in connection with the proposed Transaction. Information regarding the persons who may, under SEC rules, be deemed participants in the solicitation of XPDI’s stockholders in connection with the proposed Transaction will be set forth in XPDI’s proxy statement / prospectus when it is filed with the SEC. You can find more information about XPDI’s directors and executive officers in XPDI’s final prospectus related to its initial public offering dated February 9, 2021.  Additional information regarding the participants in the proxy solicitation and a description of their direct and indirect interests will be included in the proxy statement / prospectus when it becomes available. Stockholders, potential investors and other interested persons should read the proxy statement / prospectus carefully when it becomes available before making any voting or investment decisions. You may obtain free copies of these documents from the sources indicated above.

Footnote for 2021 & 2022:
Forecasted results for the years ended December 31, 2021 and 2022 are based on current estimates of Core Scientific’s revenue and operating income excluding depreciation and amortization.  Core Scientific does not, and cannot without unreasonable effort, forecast net income or other discrete items such as interest expense, net, stock-based compensation or gains, losses or impairments on digital currency assets and property, plant and equipment. Adjusted EBITDA, which is not prepared under any comprehensive set of accounting rules or principles, has limitations as an analytical tool and you should not consider it in isolation or as a substitute for analysis of any financial results as reported in accordance with generally accepted accounting principles in the United States (“GAAP”).  In particular, Adjusted EBITDA should not be viewed as a substitute for, or superior to, net income (loss) prepared in accordance with GAAP as a measure of profitability or liquidity.

March 4, 2022Transition Equity Partners Announces Additional Investment in NextDecade
August 2, 2021Transition Equity Partners Announces Investment in NextDecade
February 9, 2021Power & Digital Infrastructure Acquisition Corp. Announces Pricing of Upsized $300 Million Initial Public Offering
January 22, 2021EPTP Sponsored SPAC Power & Digital Infrastructure Acquisition Corp. Files For a $250 Million Initial Public Offering
We use cookies on our website to give you the most relevant experience by remembering your preferences and repeat visits. By clicking “Accept”, you consent to the use of ALL the cookies.
Do not sell my personal information.
Cookie SettingsAccept
Manage consent

This website uses cookies to improve your experience while you navigate through the website. Out of these, the cookies that are categorized as necessary are stored on your browser as they are essential for the working of basic functionalities of the website. We also use third-party cookies that help us analyze and understand how you use this website. These cookies will be stored in your browser only with your consent. You also have the option to opt-out of these cookies. But opting out of some of these cookies may affect your browsing experience.
Necessary Always Enabled
Necessary cookies are absolutely essential for the website to function properly. These cookies ensure basic functionalities and security features of the website, anonymously.
Functional
Functional cookies help to perform certain functionalities like sharing the content of the website on social media platforms, collect feedbacks, and other third-party features.
Performance
Performance cookies are used to understand and analyze the key performance indexes of the website which helps in delivering a better user experience for the visitors.
Analytics
Analytical cookies are used to understand how visitors interact with the website. These cookies help provide information on metrics the number of visitors, bounce rate, traffic source, etc.
Advertisement
Advertisement cookies are used to provide visitors with relevant ads and marketing campaigns. These cookies track visitors across websites and collect information to provide customized ads.
Others
Other uncategorized cookies are those that are being analyzed and have not been classified into a category as yet.
SAVE & ACCEPT